Try to censor peacepalestine? It's Tony wot done it. 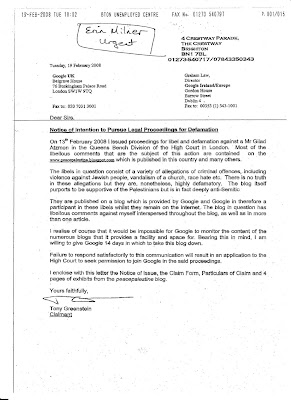 Yes, dear friends and readers. You have been following the saga of Tony vs Gilad Atzmon and peacepalestine (or Mary Rizzo, since he seems to blur the distinction). Yes, you have signed an open letter for Tony to stop the defamation and harassment and let us continue our work of exposing Israeli crimes, Western complicity and in asking us to assume our responsibilities towards the Palestinian people and the other people oppressed by Zionism, and that includes you and me and all of us who want justice and rule of law. Rather than reflect and see that he is on the margin of the margin and no one wants him to dictate to Palestinians or activists for their rights what the discourse is supposed to be, who should be silenced and smeared and to mismanage every single campaign he works on. He is out to destroy and "target" all those who oppose him, and he doesn't care about what "the movement" says and requests.

In the past day, we have seen this blog go down. Without any warning, it simply vanished. Thinking it was a technical glitch, I had contacted Google. I thought it would be a long wait, since this company is big and has millions of sites and blogs to think about. MUCH to Google's credit, they immediately informed me that there was legal action being taken against my site and sent me court documents. Actually, it was not against my site, but as I was already aware of, Tony Greenstein is suing Gilad Atzmon, although, on his friendly sites, he tells the 18 readers that he is being himself sued!!! Tony hates Gilad more than anything. More than Zionists. (Ask yourself why...) He never touches Zionist sites, seems to think my parody of Gilad Shalit campaign is horrors, but ignores the actual campaign, which he seems to have no qualms with. He only tries to bring down one of the most widely read Palestinian blogs, many hardworking and committed pro-Palestinian groups such as Redress and DYR, as well as now deciding that the list of signatories will comprise his new battles for justice. Yes, the activists in Palestinian activism don't only get insulted and called collaborators, now they will be targeted! Great Tony, glad to see you are consistent in your abuse, going only in the direction of those who engage in total solidarity with the righteous cause of the Palestinians!

So, I saw the suit, where he gives Google an ultimatum to take my blog down because HE SAYS SO. I ask you to read the PDF. It is quite interesting! 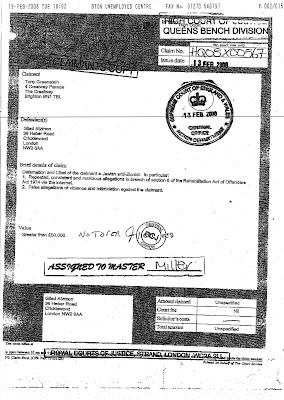 There are several interesting contradictions between it and the content of the Claim, which I am only reprinting the first page, although Google sent it all to me. (I can't believe how good Google was in all of this, and I intend upon sending them a thank you note as well as encouraging all of us to support them when they make these decisions). Read both items carefully (clicking on them enlarges them), and you will note some very odd things. There is a serious contradiction there, and I know all of you can see it. The letter practically contradicts the allegations of the claim itself!! This should not escape the attentive eye and it makes one wonder what the claim is even supposed to be about if not just stopping Gilad Atzmon and trying to squeeze money out of him based on the hope that others are inattentive. But let's examine still more: Yes, Tony is suing Gilad and yes, Tony claims, without any evidence, just his good name (sic) that "There is no truth in these allegations but they are, nonetheless, highly defamatory. The blog itself purports to be supportive of the Palestinians but is in fact deeply anti-Semitic".

So, besides the immediate huge support from my friends and fellow activists who already had it up to their eyeballs with his games, they nevertheless dropped what they were doing and went into action in a matter of moments, and were planning other actions - thinking, as I was, that this would be a long struggle, and they were going to fight to the bitter end. We were creating new blogs, saving content from archived material, sharing stuff on computers so that we all had backups.... these are the best friends in the world, as well as the greatest activists I have ever known... During this time I wrote twice to Google asking them to actually investigate the claim by Tony. These are my letters:

Dear Sirs,
If you read the pdf you sent, it is clear that there is no suit filed against me. Nor have I received any calls to alter or to delete information from anyone.

You may be aware that you have made a judgment yourself based on the comments of a person who has been repeatedly harassing in numerous ways over the course of years a great number of activists. As a matter of fact, he has been using the terminology to smear and defame others as his political tool. There has been no evidence provided in the claim he makes in the Pdf: "The blog itself purports to be supportive of Palestinians but is in fact deeply anti-Semitic."

IN fact, the claim is not against me, but against another person, who also has not been demonstrated to be anti-Semitic, despite the claims this individual uses to smear us. Read the Pdf, and you can see for yourself what the content is, and my blog should NOT have been pulled without warning, especially since it is one of the most widely circulated and trusted blogs on the subject of Palestinian rights, Human rights, Activism and Anti-War.

As a matter of fact, my blog is in no way racist or anti-Semitic. In fact, his "evidence" is that I have in the past sought to deter others from engaging in smear campaigns and rather do political work. This to him, especially when he operates to smear and damage activists, is defined as racist and anti-Semitic. I am not affiliated with anti-semites or neo-Nazis and he knows this. And, as a matter of fact, the BLOG is only composed of posts I have set up. There is not a single anti-Semitic post on it, and he has never been able to find one, yet continues in the harassment.

This harassment was requested also to be stopped by a large number of anti-racist activists, including a Holocaust survivor. In addition, being of Jewish origin myself, it is a strange claim to make on his part.

If that were not enough, I was actively involved in the campaign to extradite Michael Seifert, an SS officer in the Bolzano Camp to Italy to face his punishment. As a matter of fact, just a few days ago, the official news dispatch service that furnishes all the newpapers with their content released this: http://www.adnkronos.com/IGN/Esteri/?id=1.0.1880767965

It is in Italian, but it is clear enough. I was a protagonist in the capture of a Nazi criminal in hiding.

It is the dispatch, including my name TWICE, once in bold text, highlighting my involvement in the discovery and bringing to justice of this Nazi. I wonder just how many friends of Neo-Nazis, anti-Semites and Holocaust Deniers or Apologists have played an active part in such work. This is evidence, as if any other were needed, that this individual invents his charges and seeks to damage humanists who work for the Palestinian cause. I need to consult my blog. I ask you to reinstate it at least for my own personal use as I wish to archive all the information. My blog is very popular, and Google may not like repercussions coming from complaints from readers.

SECOND LETTER, (a few hours later)
I have requested that you reinstate the blog for my personal use (at the very least), as there has been no judgment against my blog, and you have yourselves decided to judge it, without any evidence that the person bringing legal action to another individual is justified in his claims.

I request that you examine the blog and you demonstrate where it is anti-Semitic if this is the decision you have made, as indeed you have made a decision and have passed judgment based on an arbitrary claim. I ask you to look up my own person history, or even just the dispatch linked to you from last week's Italian News Service dispatch Adnkronos, which supplies all the Italian media with their news feed, and you will see that I am a well-known activist and have an excellent track record FIGHTING hate crimes, and not supporting them.

I further request that since the material on the blog is intellectual property and contains not simply words, but the writing of many individuals as compiled by myself, almost all of these persons, if not the entirety, involved for many years in Human rights activism, and well-known persons, have been insulted and smeared as well by having their content removed from your server, and therefore, the net, and for this reason, out of respect for them, who work using their own names, I also that you identify yourselves also by name - not Blogger Team - so that I am allowed to know which human beings have made this decision.

I may not need to remind you that on the Social Rank rating (the currently most popular one for blogs) my blog is always among the top 3 Palestinian blogs. It has extensive readership, and its absence from your server is not going unnoticed.
Awaiting your quick reply
Mary Rizzo

THIS IS BLOGGER'S REPLY