Khalid Amayreh - The Vatican must show goodwill toward Muslims 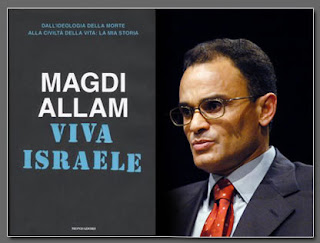 The highly-publicized conversion to Catholicism of a naturalized Italian citizen of Egyptian origin this week once again illustrates the uneasy relations between Islam and western Christianity.

The problem, of course, doesn’t lie in the conversion itself. People after all should be free to choose their faith and way of life without coercion. The Quran itself declares that “let there be no compulsion in religion.” The way Muslims ought to relate to disbelievers is engraved in Sura (or chapter) 9 of Islam’s holy scriptures, which reads:

But the problem lies in the vindictive atmosphere surrounding the conversion ceremony, including the anti-Islamic allusions and insinuations.

Magdi Allam, who an Israel newspaper once called a “Muslim Zionist” admitted that he had always been a nominal Muslim, that he had never really practiced Islam and never prayed in his life. Yet, we have been told ad nauseam by a wantonly ignorant or dishonest Western media that Allam was “a prominent Muslim.”

Well, the truth is that he was neither Muslim nor prominent. How could a person who praises and glorifies Israel’s genocidal crimes against his fellow human beings (Christian and Muslims alike) be a man of faith? Morality, honesty and candor are the ultimate signs of faith, characters that Allam conspicuously lacks.

So, it is highly doubtful that a man who believes Zionism represents true righteousness and genuine civility will be a righteous individual, let alone a good Catholic.

In the context of his baptism at the hands of the Pope of the Vatican, Allam made a series of provocative lies against Islam.

The man who had written a book titled “Long Live Israel” was quoted as saying that “the root of evil is innate in an Islam that is physiologically violent and historically conflictual."

This is a cardinal mendacity, because all religions, ideologies, and isms are by definition “conflictual.” Indeed, in order for an idea, any idea, to be un-conflictual, it has to be completely “morally neutral” between good and evil. Christianity itself was conflictual from day one.

The above shows beyond doubt that Allam doesn’t know what he is talking about when he faults Islam for being “historically conflictual.”

As to the issue of violence, Allam is being equally ignorant of historical facts, because if a religion is to be judged solely by the behavior of its followers, then Christianity stands out as the main candidate for being the most violent religion under the sun.

Let us consider some of the following historical facts pertaining to the relationship between Christianity and violence. In the past century alone, Western “Christians” killed more than a hundred million people, mostly other Christians. In just two essentially ‘Christian' World Wars, as many as 70 million people were killed. Indeed, the numerous crusades, holocausts, pogroms, inquisitions, gulags and ethnic cleansings that the White man committed in the name of Jesus make Muslim violence and wars look utterly negligible in comparison.

In the Middle Ages, Catholics spread death, terror and havoc through Europe, Asia Minor and the Levant. The Franks not only slaughtered Muslims and Jews en masse, but targeted their Orthodox coreligionists, destroying and desecrating their churches, murdering their priests and raping their women.

In North America, South America and Australia the White man murdered millions in the name of Christ and Manifest Destiny.

To be sure, Muslims, too, indulged in violence, including unjustified violence. However, stigmatizing Islam with this calumny, as if the hands of Catholics and other western Christians were clean, constitutes a pornographic deviation from historical truth and honesty.

Samuel P. Huntington is one of the West’s most prominent contemporary intellectuals. He argued that “the west won the world not by the superiority of its ideas or values or religion, but rather by its superiority in applying organized violence.”

“Westerners,” he said, “often forget this fact, non-Westerners never do.”

One Vatican official, Cardinal Giovanni, told an Italian newspaper following the conversion ceremony that “conversion is a private matter, a personal thing and we hope that the baptism will not be interpreted negatively by Muslims.”

Well, one might give Giovanni the benefit of the doubt were it not for the purposefully high profile the Vatican gave this conversion. In the final analysis, the Vatican can’t hope for good relations with Muslims and at the same time continue to incite hatred and racism against a religion that has as many as 15 hundred million followers, including millions of Europeans and hundreds of thousands of Italians.

Millions of erstwhile Christians converted to Islam in Europe and North America in recent years. However, unlike the Vatican, the Muslim religious authorities have chosen not to turn every conversion into a trial of Christianity.

Finally, it is imperative to remember that Muslims and Christians are neighbors and compatriots all over the world. This fact alone, which is not going to disappear, necessitates that each community be sensitive to the sensibilities and feelings of the other.

Mutual respect, we are told, is the essence of religious faith.

To read excellent opinion pieces in Italian on Allam, see Sherif's blog. To add my own commentary, I want to mention that 4 and a half years ago, Allam came to my town to promote his book on Saddam Hussein (which had as bibilographical references nothing more than Allam's own articles and pages were dedicated to the style of moustache and hair colouring of Saddam...) and one of the conclusions he came to was that the War never would really have happened if people had not protested for "peace". He said that this gave Saddam the false confidence that he could win, and that the war then became inevitable. In essence, protesters were blamed for fanning the flames of war. Also at that presentation, two Palestinians who tried to speak had the microphone taken from them before they could even finish their question. As soon as they said negative comments about Israel, the "security" force ran to them and shut them up. There were about 20 people who protested this, and we were asked to leave. The host of the event, who is a bookseller and who knows me later apologised to me for it but said that there were strict rules set by Allam and his own bodyguards that they did not want any agitators. The list of topics that would not be addressed were Palestine and Israel and when these words came out, the security staff were ordered to remove the microphones. The fact that calling most of us sitting there agitators because we protested the war is evidence of the kind of person Allam is.