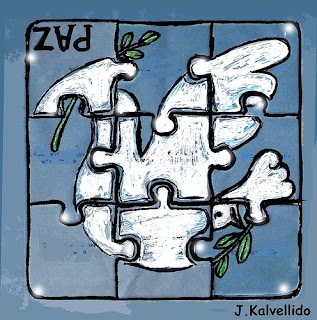 Here we are on the road again with the very colorful Wheels of Justice bus tour. The prominent slogan on the side of the bus is the most appropriate message for this week of violence. In big letters we have "Nonviolence or Nonexistence" visible for the thousands who saw the bus in the past few days. ... We post some of our public events at http://justicewheels.org and we hope you will join us or organize events for us.

We wanted to write more about the tour with a blog of all the great things we did and saw this past week (e.g. the great questions from hundreds of students in WA and OR). However, it is worthwhile to focus on this issue of violence and existence in more detail considering the news from occupied Palestine in this weekly message and add relevant good articles. While we are never shocked by the distorted US media coverage of what is going on, we are sometimes surprised by the audacity of editors and journalists. For example, compare the coverage of the killing of 8 Israelis in occupied Jerusalem with the coverage of the killing of 126 Palestinians in Gaza in the seven days before that; including many children (four playing soccer, babies in mother's arms, etc). BTW, only Israeli papers like Haaretz explained the history of the "school" that the Israelis were killed at (a training school for terrorist Rabbis). It might be worthwhile to put out some quotes on the so-called "cycle of violence" between the occupier/colonizer and the occupied/colonized (and people forget this aspect, the etiology of the disease, when they focus on the symptoms/the violence):

"The curse of Gaza is as powerful as death: if the entire occupation is a tragedy, the occupation of Gaza is its essence: 360 square kilometers, some 1.5 million people, 1 million refugees, and the responsibility is all ours. From the beginning there were those who warned us of the curse, and not only Sapir; even Moshe Dayan used words of caution. It did no good. The euphoria is contagious, the war rolls on, and a wise people is a foolish one. In the Zionist enterprise's march of folly, Gaza stands out as a major milestone, a signpost of weeping. The foundation stone of our tears."
Yossi Sarid

"Many westerners justify Israel's actions because they believe that Israel, as a sovereign country, has the right to defend itself. The truth is, so long as the government of Israel is occupying the Palestinian territories, the West Bank, East Jerusalem, and the Gaza Strip and denying the people their freedom, dignity, and human as well as political rights, international law gives them the right to resist and to defend themselves. "
Sabeel Ecuminical Liberation Theology Center

"As long as there is occupation and the brutality and violence it entails, we will mourn Israeli and Palestinian lives. In this context, media coverage that portrays violence as part of a short-term cycle of attack and retaliation obscures the facts, including the role the US has played, through covert action, in fomenting civil war in Gaza, as recently revealed by a groundbreaking report in Vanity Fair. As long as the United States continues to support Israel's decades-long practice of illegally appropriating land, destroying homes, and using disproportionate force--a policy which has proven to be both morally bankrupt and self-destructive for Israel--neither Palestinians nor Israelis will ever know peace."
Jewish Voice For Peace
"The murderers [Palestinians] are the Amalek of our day, coming to remind us that Amalek has not disappeared, just changed its appearance."
Settler Rabbi Ya'akov Shapira, head of the center that trained the "students" in hate at this extremist "seminar/Yeshiva" that created so many extremist colonial settlers.
(For those who do not know what Amalek is they should read the part of the Old Testament were God gets to give the orders for the genocide of men, women and children of the Amalkites, Canaanite native inhabitants of the land to be conquered).
"Compared with the international silence that surrounded Israel's recent massacres of Palestinian civilians in the Occupied Gaza Strip, condemnation and condolences for the victims of the shooting attack that killed eight students at the Mercaz HaRav Yeshiva in Jerusalem has been swift...The day before the Jerusalem attack, Amira Abu 'Aser was buried in Gaza.
She had lived just 20 days on this earth before being shot in the head by Israeli occupation forces who attacked the house of friends she and her family were visiting. Needless to say, she had not been firing rockets at Sderot when she was killed. One of the house's inhabitants was found the next day, shot dead and his head crushed by an army jeep, an apparent victim of an extrajudicial murder by Israeli forces."
Ali Abunimah in the Electronic Intifada

"We need to find a legal and legitimate way to kick those few Palestinian Arabs in east Jerusalem who make it their choice to aid and take part in terrorism back to Ramallah,"
Israel's "Public Security" Minister Avi Dichter

"We at Tikkun feel equally grieving for the people killed by vicious and immoral terrorists at the Yeshiva Mercaz HaRav (the ultra-nationalist religious center that developed the ideology which inspired religious Zionists to believe that they had a God-given right to settle and hold on to the territories without regard to the consequences for the Palestinian people already living there) as we do for the victims of Israeli terror (which in the past week killed 120 people, many of them children, many of them sitting in their homes when Israeli troops randomly fire-bombed and murdered them, as documented by the same international human rights organizations that today condemned the attack in Jerusalem by terrorists)."
Rabbi Michael Lerner of Tikkun

“Condemning the ongoing Palestinian rocket attacks on Israeli civilians by Hamas and other Palestinian terrorist organizations, and for other purposes...”
US House Resolution 951
Statement on Gaza Bill by Rep. Ron Paul March 5, 2008 (Paul was the only one who voted Nay!):
I rise in opposition to H. Res. 951. As one who is consistently against war and violence, I obviously do not support the firing of rockets indiscriminately into civilian populations. I believe it is appalling that Palestinians are firing rockets that harm innocent Israelis, just as I believe it is appalling that Israel fires missiles into Palestinian areas where children and other non-combatants are killed and injured. Unfortunately, legislation such as this is more likely to perpetuate violence in the Middle East than contribute to its abatement. It is our continued involvement and intervention – particularly when it appears to be one-sided – that reduces the incentive for opposing sides to reach a lasting peace agreement. Additionally, this bill will continue the march toward war with Iran and Syria, as it contains provocative language targeting these countries. The legislation oversimplifies the Israel/Palestine conflict and the larger unrest in the Middle East by simply pointing the finger at Iran and Syria . This is another piece in a steady series of legislation passed in the House that intensifies enmity between the United States and Iran and Syria . My colleagues will recall that we saw a similar steady stream of provocative legislation against Iraq in the years before the US attack on that country. I strongly believe that we must cease making proclamations involving conflicts that have nothing to do with the United States. We incur the wrath of those who feel slighted while doing very little to slow or stop the violence.
(ACTION: Write and/or call to your congressman/women and ask them why they voted in support of Apartheid Israel aggression. Phone numbers for reps here http://clerk.house.gov/member_info/mcapdir.html ).

But perhaps the most poignant comment on violence in Palestine/Israel is these statements from Nurit Peled-Elhanan whose daughter was killed by a Palestinian suicide bomber:http://www.qumsiyeh.org/nuritpeledelhanan/

(Must Read) The Day the Earth and Sky Traded Places: Gazan Holocaust By JENNIFER LOEWENSTEIN http://www.counterpunch.org/loewenstein03042008.html

An Interview with Aharon Shabtaï "Israel's most acclaimed Hebrew poet." He explains need for cultural boycott of Israel: "Israel, 'Guest Of Honour' In Paris And Turin, Does Not Deserve To Be Invited," By Silvia Cattori & Aharon Shabtaï, 26 February, 2008, Countercurrents.org. http://www.countercurrents.org/cattori260208.htm

WASHINGTON, DC -- Calling the Siege of Gaza an international emergency, the Green Party is urging Congress to reject President Bush's FY2009 budget request for $2.55 billion in Foreign Military Financing for Israel, and reiterated the call for a cut-off of all US military aid to Israel."The Siege of Gaza is an ongoing atrocity, with mounting civilian casualties, especially children, killed and maimed by Israeli Defense Forces," said Holly Hart, secretary of the Green Party of the United States and member of People for Justice in Palestine, responding to the mass killing of Palestinians during the past weekend. "Greens are demanding an end to the siege and to the occupation of Palestinian lands, to Israel's collective punishment of Palestinians, and to targeted assassinations, all of which violate international law."

Greens noted that the death toll of Palestinians killed by Israeli forces has doubled since the Annapolis peace talks sponsored by the US in November 2007. In some areas of the West Bank, home invasions by IDF since January 1 have resulted in the kidnapping and detention without charges of nearly 400 civilians, including children.

1.5 million Gazans, mostly refugees from Israel in 1948, live in an open-air prison, unable to exit, and with electricity, fuel, and water under Israeli control.

"Peace talks are a sham as long as Israel refuses to discuss the construction of new housing units for Jewish settlers throughout occupied East Jerusalem and the rest of the West Bank," said David J. Kalbfleisch, a Green congressional candidate in Illinois' 10thdistrict http://www.electdave.org/.

The One Candidate Worth Our Vote: Nader the Best Antidote to American ImperialismBy KATHLEEN and BILL CHRISTISON http://www.counterpunch.org/christison03012008.html
Mazin QumsiyehWheels of Justice Tour: Nonviolent education and action against war and occupation in Iraq and Palestine for justice and universal humanrights http://justicewheels.orghttp://qumsiyeh.org